“When Blue Met Egg author/illustrator Lindsay Ward’s THE BALLOON THIEVES, about a little girl who uses balloons to help carousel animals escape, to Nancy Concescu at Dial Children’s Books for Young Readers, for publication in 2013, by Mary Kole at Andrea Brown Literary Agency.”
Thanks Kellie for sending this to me, sometimes I live in a hole, as you know.
So now you know why I have polar bear pictures from the zoo….
Coming soon… 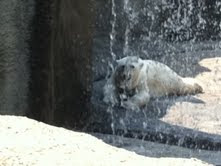 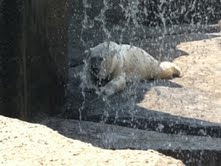 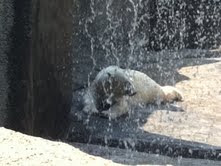 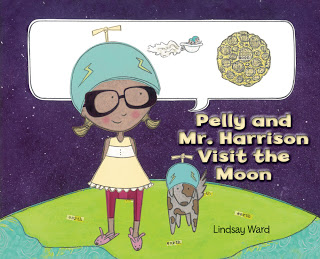 Check out this new review of Pelly and Mr. Harrison Visit the Moon, posted by Curledupkids.com!

I am so excited to share with you all the cover of my new book, When Blue Met Egg, due early next spring! I feel like a proud mama! The whole team at Dial Books for Young Readers, including my fabulous editor, Nancy Conescu, helped me create this awesome cover. The font and design layout they chose is perfect! I just love Blue holding up the bar code! I hope you all love it just as much as I do. Enjoy! 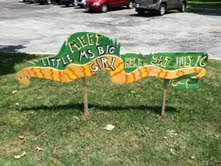 I just had to blog about this. I recently moved to a very small town (literally about 600 people live here) named Peninsula, which is in the middle of a national park. It is by far the coolest place I have ever lived (which at this point includes the following: San Jose, Syracuse, New York City, and Boston, so I feel like I have a decently well-rounded view). Let me tell you why Peninsula is so cool:

1. It is in the middle of a national park which means it is gorgeous
2. A river runs through it (this follows back to reason No. 1)
3. A steam engine train (which poses as the Polar Express and Thomas the Train during certain times of the year) runs through it
4. It celebrates weird and awesome holidays such as Harry Potter Day, Peddler’s Day, and Python Day (more on this down below)
5. It has an awesome library
6. Everyone knows everyone
7. All the buildings are historically preserved and date back to the mid 1800s. (I’m an architectural nerd so I love this)
8. We have a wicked sweet ice cream place
9. We have hands down the best farmer’s market on the planet! Seriously it changes lives, the food is so amazing.
10. There are trails for walking and biking that follow the river that you can take all the way to Cleveland and Lake Erie or to Akron.
Now these may not be reasons for everyone, but they are perfect for me. Oh, and yeah, I am a hell of a lot more creative in this place than anywhere I have ever lived. I think it’s all the extra trees and ‘parkness’ that makes it feeding ground for ideas. But lets get back to the best reason: the weird holidays Peninsula celebrates.
Python Day was yesterday here in Peninsula. The history of Python Day began in 1944 when a circus train came through the town on its way to Akron. One of the carts got loose and crashed releasing the very large python inside. The Python spent the next 8 years feeding on the resident’s small dogs, chickens, and other various small animals in the town. Finally the python was found, but for 8 years the residents of Peninsula were on the look out everywhere they went. Now rather than this just being a quirky story within the history of Peninsula, the town decided to create a holiday out of it. So now every July we have Python Day. The town brings in a real python (pictures of this below) and various other snakes for kids to pet (to which my reaction was to stand on the opposite side of the room!). Everyone in the town puts snakes in their front yard (not real ones of course!) and at the end of the day there is a parade with a 100 ft. python that is marched down through the center of town. At this point there are only 2 surviving residents who lived in Peninsula when the original python was loose. The best part is that the town has so much pride in their odd holiday, and everyone in the area comes to visit on Python Day.

The real python they bring in for the kids to pet (yikes!) The midsection of this python is about a foot!!
Some of the snakes people display in their yards: 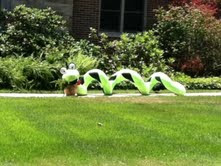 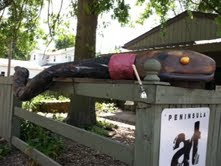 Here are some photos from my Barnes & Noble event this past Friday. Thank you to everyone who came! Pelly and I had a great time!

Hi All!
I will be at the Barnes and Noble in Crocker Park in Westlake, Ohio this Friday for story hour at 10:30 am. For all of you who live in the area, I hope to see you there! And so does Pelly!