I recently signed a new book deal with my publisher for a book tentatively titled Henry Finds His Word.  Through the process of working on my dummy for Henry I thought a lot about style.  What defines my style as an illustrator?  And how does it affect how art directors look at my work when searching for an illustrator for their manuscript?

Generally, everyone who knows my work knows me as the ‘cut paper girl.’  All of my published work has been in cut paper and mixed media, with the exception of the four spot illustrations I did for the first STAR Academy cover in watercolor.  (You try doing black and white spots in cut paper and see how well they come out…)  I have mixed feelings about this.  Although I love cut paper and it is the medium I prefer to work in, sometimes I wonder if it limits me.  I realize that cut paper creates a very distinct look that is not suitable for all manuscripts.  But does it shy art directors away from asking me to work on projects in general?

It’s funny because I think as an illustrator, once you begin working on your own books, art directors tend to think that you don’t want to work on anybody else’s.  Which from a financial standpoint makes perfect sense.  Why would you share royalties if you don’t have to?  But from a creative standpoint, it seems limiting.  Sometimes I find that although I love writing and creating my own characters, it’s nice to step out of my head once and while and take a peek in someone else’s.  I love reading a manuscript with a scene or situation that I have no idea how I’m going to tackle.  At times it can be frustrating of course, I would be lying if I didn’t say so, yet completely rewarding when I finish the illustration successfully.  I don’t ever want to stand still and become stagnant is this business, I want to push myself to become a better illustrator with every book I do.

So this brings me back to Henry.  Henry is for much younger readers.  Henry is, after all, a baby.  When I sat down to come up with the look for this book I kept forcing myself to work in cut paper and mixed media, because that is what I have done with every other book so far.  But I kept getting stuck.  The artwork just didn’t look right and it didn’t seem to match the story.  This is something I have realized is okay.  I used to think that if I couldn’t visualize how I would illustrate the story, then it wasn’t something I wanted to write.  But really what I was doing was picturing the illustrations in cut paper only.  I wasn’t taking into account what the right medium for the story should be.

You wouldn’t know it now, but in college I worked predominately in water color, pastel, and woodblock prints.  That was what I was comfortable with.  Back then it was really easy to get caught up in what my “style” was.  I was so obsessed with defining my “style” for my portfolio, which to me meant my medium.  Just because you use the same medium for two different pieces doesn’t mean they are the same style, it just means they are the same medium.  Big difference.  Once I graduated I realized that “style” is more about who you are as an artist and less about what you use to create your art with.  I find that my style or the soul of my work, as I like to think of it, exists in my lines.  Lines of an artist are like finger prints, no two are alike.  Your line defines you as an artist.  Only your hand creates your lines.  Sure, you can mimic someone else’s, but when you are sketching or doodling while on the phone those are yours.  No matter what medium, it’s still you.

So when I hit the wall with Henry I had to walk away.  I was trying way too hard to force something that just wasn’t working.  And then it hit me!  The next morning I got up and realized that I don’t have to illustrate Henry in cut paper.  Now this may not seem like an epiphany to you, but it certainly was to me.  When you are known for doing one thing, it can be really scary to step out.  I sat down with my sketches of Henry and I just began to paint…in acrylic, no less, which by the way is my least favorite type of paint.  But it was the right type for Henry.  Because Henry is for a younger reader, intricate cut paper illustrations would be too much.  I needed to simplify.  Bolder color, more space, and larger shapes.  Which led me to this: 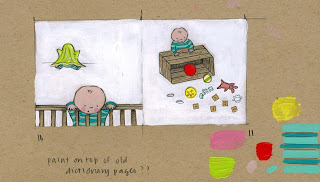 I think Henry is a lot happier too.
So don’t be afraid to step out and try new mediums, let the manuscript speak to you.  Experiment and exhaust all your options because you never know what you will end up with on the page.

Just a quick post today!  Things have been super busy lately, so I apologize for my lack of weekly posts!

I’m very excited to be on the faculty of the SCBWI Northern Ohio Chapter’s Annual Conference coming up September 21st and 22nd.  I will be teaching an illustration intensive on Friday, a breakout session on Saturday, and offering critiques.  If you are in the Ohio area, please make sure to register:

I hope to see you there!!