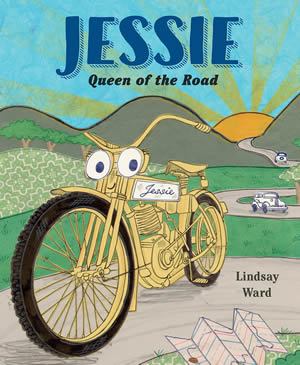 A story about being brave, believing in yourself, and breaking barriers―inspired by seven female motorcyclists.

In the early twentieth century, a teenage Jessie races the streets of New York City―the only female motorcycle around. After being called unladylike too many times, she leaves and becomes the first female motorcycle to traverse America. But a few years later, when she tries to enlist during World War I, she’s turned down because she’s a woman. So she sets her own course, meeting other female motorcycles, working as a stunt rider, and eventually becoming a courier during World War II. Over the decades and after many achievements―and a few color changes―one thing is clear to Jessie: there’s always a new adventure just around the bend.

Inspired by seven women who rode motorcycles and achieved notable distinctions in an era when they faced numerous barriers, this story is a reminder of the possibilities that await us and what we can accomplish, even against the odds.