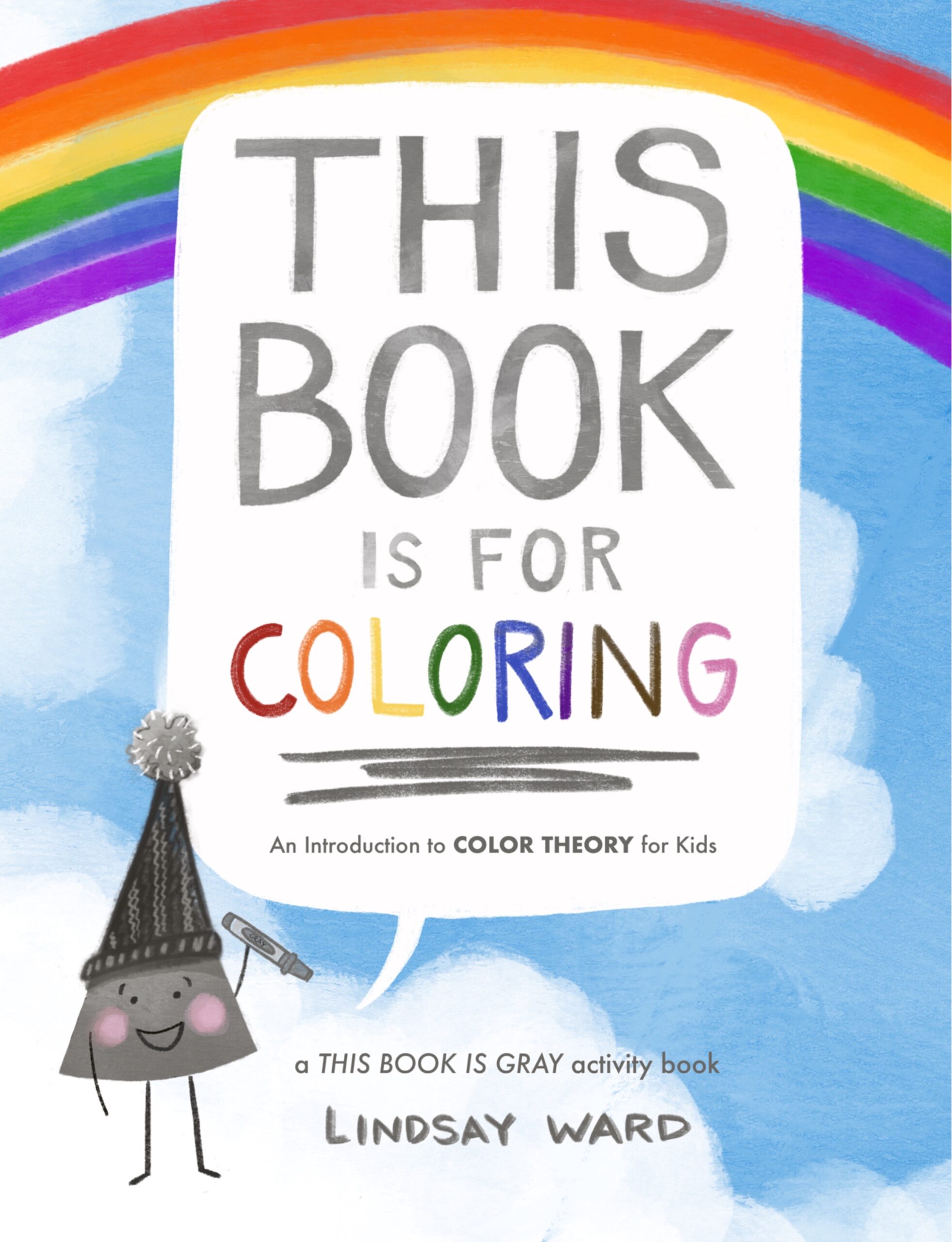 Gray is back! And this time he’s teaching readers about color theory in a new activity book for kids, THIS BOOK IS FOR COLORING!

Join Gray and the rest of the colors to learn about the color wheel, color mixing, and color relationships in this fun, interactive companion book to THIS BOOK IS GRAY by Lindsay Ward. Perfect for ages 5+

Praise for THIS BOOK IS GRAY

“This book is a fun introduction to color theory that may inspire children to use more gray in their artwork and remind them to include friends who are left out.” —Booklist

“A colorful primer on relationships and how to complement one another.”—School Library Journal 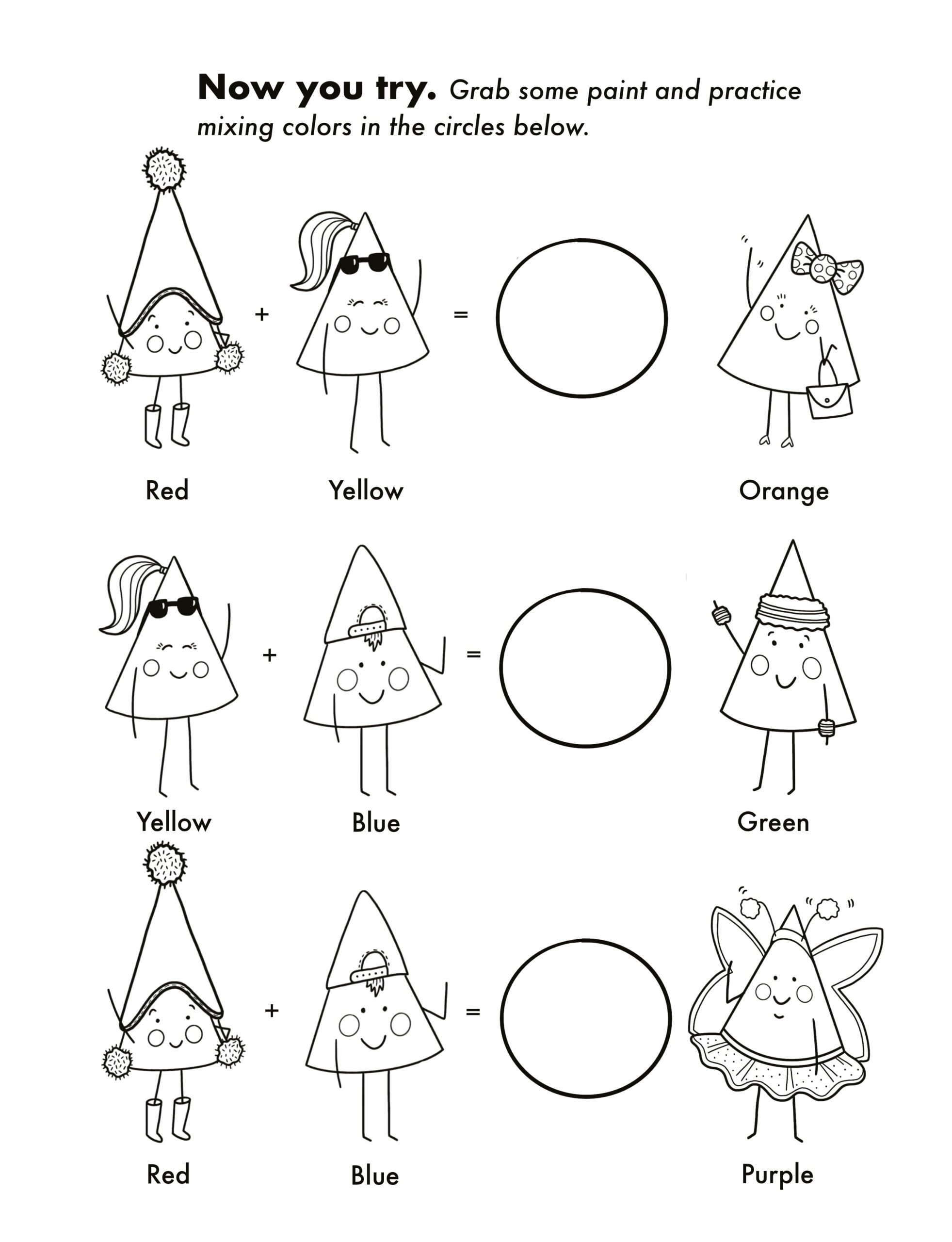 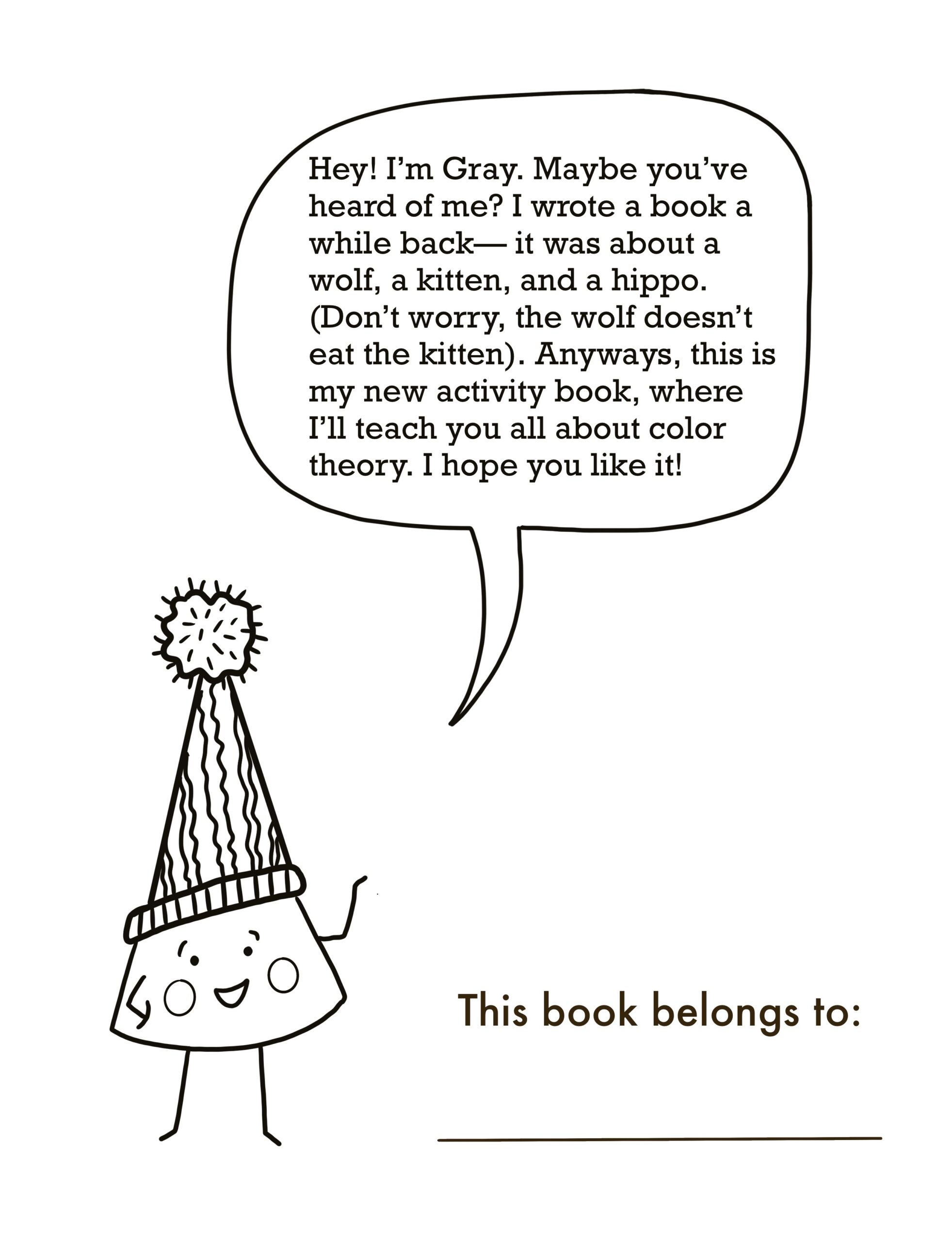 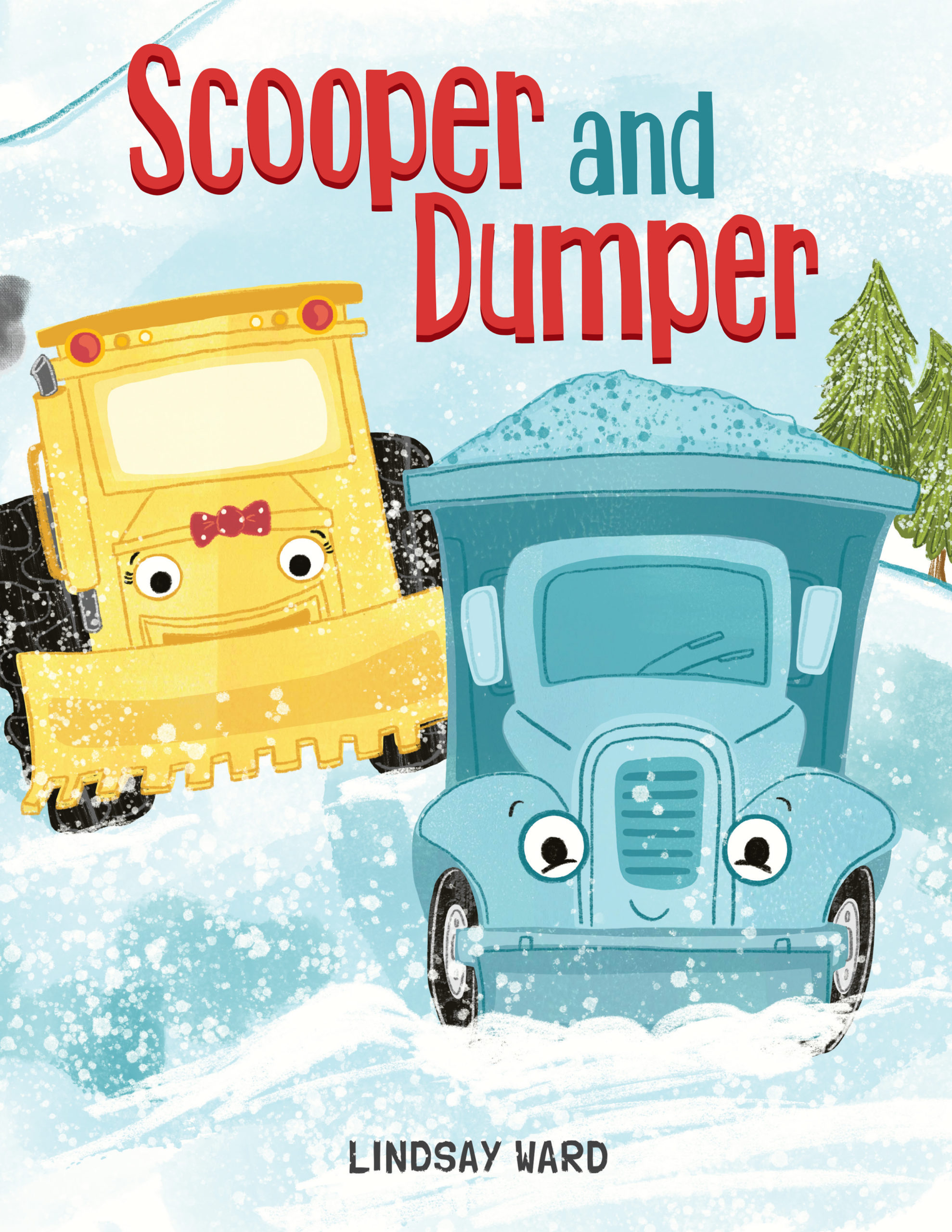 Clear the road, salt the street.
Work together, can’t be beat!

The best of friends, Scooper and Dumper take care of their town in all kinds of weather. One day, a snowstorm hits and the big city needs their help to clear the roads. Each of them must be brave in their own way to get the job done. 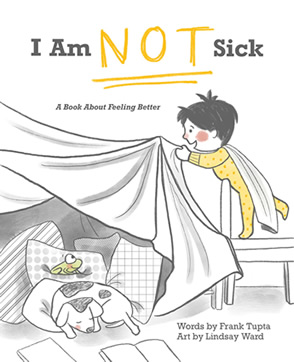 So things are crazy right now. And everything in the world is really overwhelming. To stay calm, my husband, Frank, and I try to stay creative. We write and draw to let go of stress. Amidst everything going on with Coronavirus and the pandemic we are all dealing with, we decided to make a FREE picture book available for download to families. Here’s a little bit more about it:

Tuck does his best to convince his parents he doesn’t need to stay home from school: I am not sick, my nose is only jogging. Then Mom sends Tuck to bed. But with the help of his dog, a frog, and a little imagination, Tuck discovers a day spent inside isn’t so bad. It may even be fun.

I Am Not Sick was a phrase our oldest son used the first week we had to keep him home from school in the wake of the Coronavirus outbreak. Why do I have to stay home? I am not sick. His response lingered with us, leading us to wonder how our three boys, all under the age of five, could possibly understand a world event such as this. With the world shutting down due to a pandemic, we felt it was important to get this story out as quickly as possible. Typically, a picture book takes two years to create with a traditional publisher. So in twelve days, from manuscript to final art, we created a book. I Am Not Sick became our way of dealing with a catastrophic event. We are coping as a family, navigating this strange time together. Not all of us want to stay home from the things we love doing, just like the main character in our story. But in this time of crisis we are asked to stay in for the safety of others. It’s our hope that families can share a few minutes of story time with us— a way for us all to connect as we practice social distancing.

Sometimes we get sick. And though it takes us away from the things we love, it’s important to remember not to be afraid. The sun WILL rise and we can all get through this together.

We understand the importance of a home library. As our country is in the midst of a financial crisis, we wanted to give our book away for free as a downloadable PDF while everyone is stuck at home dealing with the onset of the Coronavirus. We hope you enjoy our small contribution. 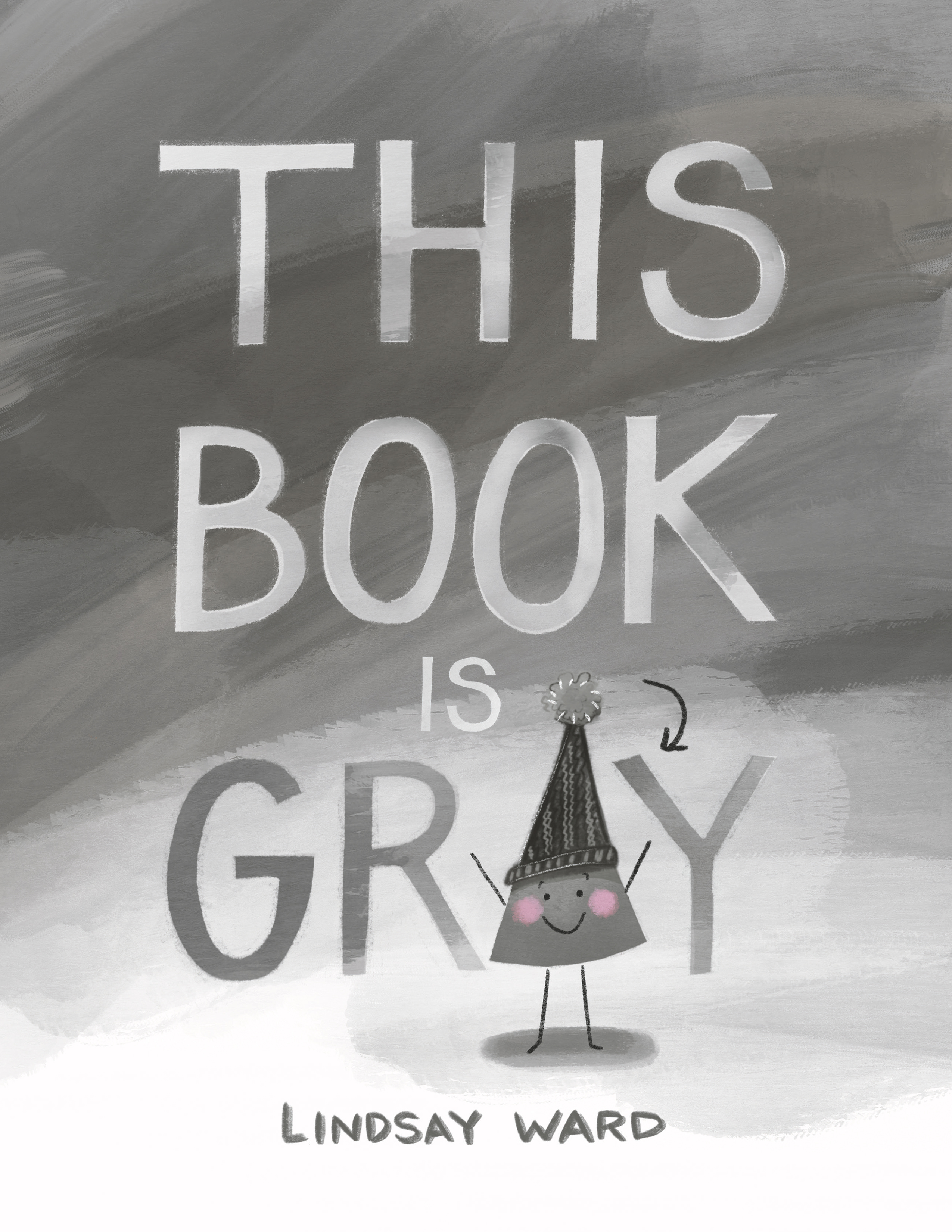 Gray just wants to be included. But the other colors are always leaving him out. So he decides to create his own project: an all-gray book. Once upon a time, there lived a wolf, a kitten, and a hippo…

Gray just knows it’s going to be perfect. But as he adds page after page, the Primary and Secondary colors show up…and they aren’t quite so complimentary.

A book within a book, this colorful tale explores the ideas of fitting in, appreciating others, and looking at things from another perspective and also uses personality and wit to introduce basic color concepts.

Check out the cover reveal for VACATION FOR DEXTER, book 3 in the Dexter T. Rexter Series! I’m so excited to share Dexter’s next adventure with you all! 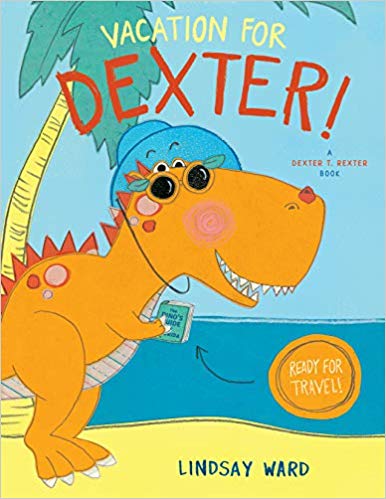 Dexter T. Rexter is on a plane—for the very first time.

Dexter can’t wait to go on vacation with his best friend, Jack. Supercool orange sunglasses? Check. Nifty travel hat? Check. Plane tickets? Uh, what? Dexter may be the toughest, coolest dinosaur around, but everyone knows T. rexes don’t fly! If anyone could do it, he could. It’s just that he’s suddenly feeling a little hot. And maybe a little nervous. But just as he starts to melt down, he notices Jack looks upset. Dexter realizes he has to be brave enough for both of them. And maybe, just maybe, he’ll start to have a bit of fun in the air.

Both nervous and funny, Dexter tells the readers what he’s feeling and even asks their advice as he comes to understand that being brave with a friend makes everything a little better. And hey, those cookies during the flight don’t hurt, either!

To pre-order your copy of VACATION FOR DEXTER, click here! 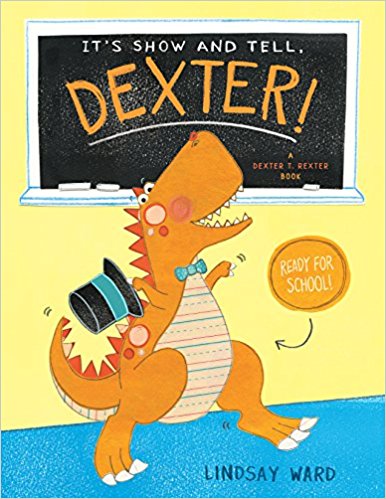 I’m so excited to share the cover for It’s Show and Tell, Dexter!, the sequel to Don’t Forget Dexter! Available through Amazon on 7/17/18!

Today is the day! My newest picture book, BROBARIANS, is officially out and I’m so excited to share it with all of you. To order, click here.

Making the cover for any book is stressful. So many things factor into the design and overall look. And of course there is the ultimate question bouncing around in the back of your mind…Will this cover sell this book? For most books I work on, I go through many revisions before I settle on the right look for the cover. So far my record is 40 cover sketches (When Blue Met Egg). Thankfully Brobarians didn’t require quite that many. Here’s a look at the sketches that lead up to the final cover I chose for Brobarians with the wonderful team I worked with at Two Lions:

I think I was a little gung-ho on this one. We ultimately didn’t go with this option because we didn’t want to give away the fantasy scenes included in the interior of the book. This is where the reader sees how the brothers actually see themselves in their imagination. 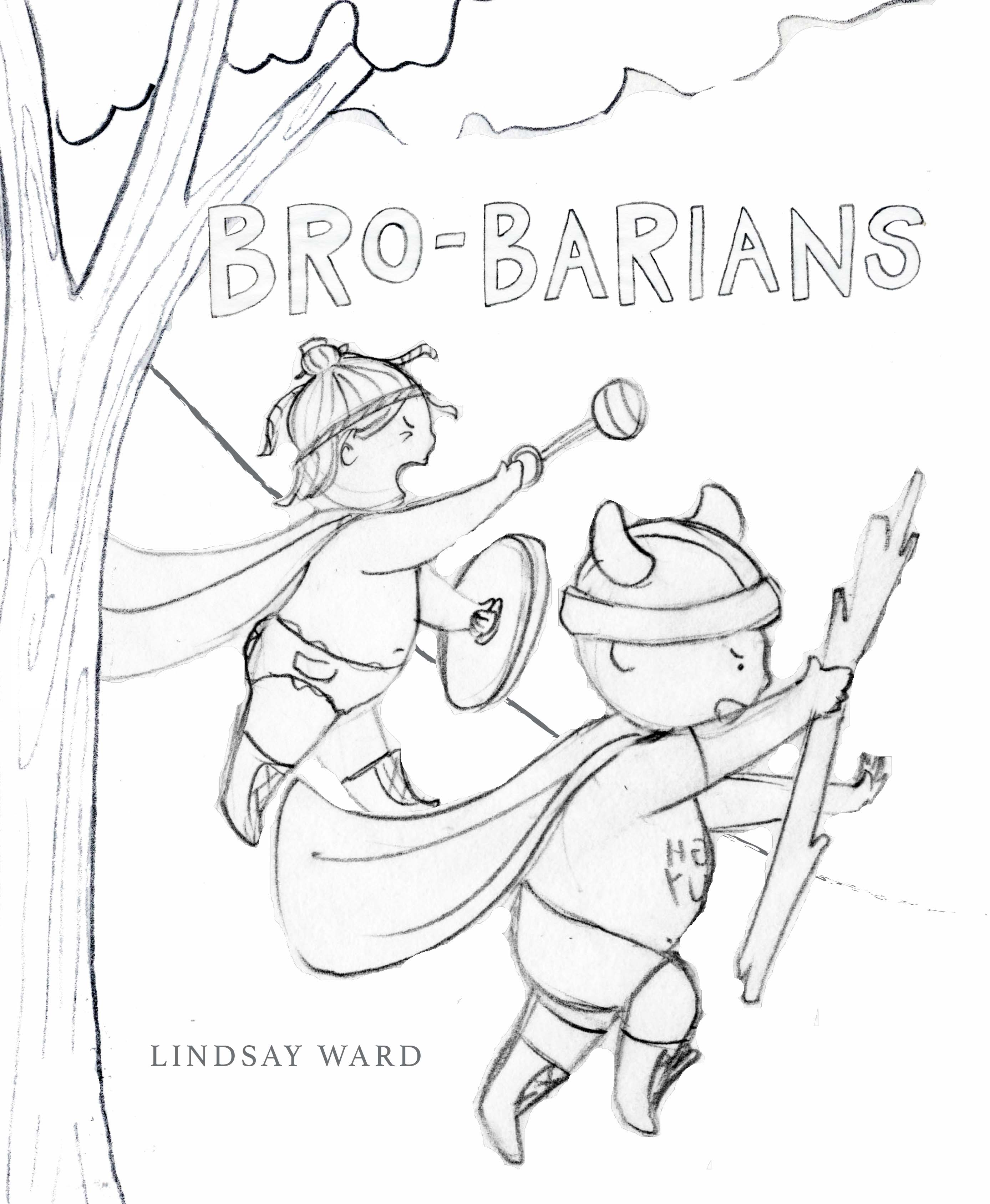 Although this really conveyed the action and energy of the story through the movement of the brothers running, we wanted readers to connect with the characters, which is tough through a profile image. 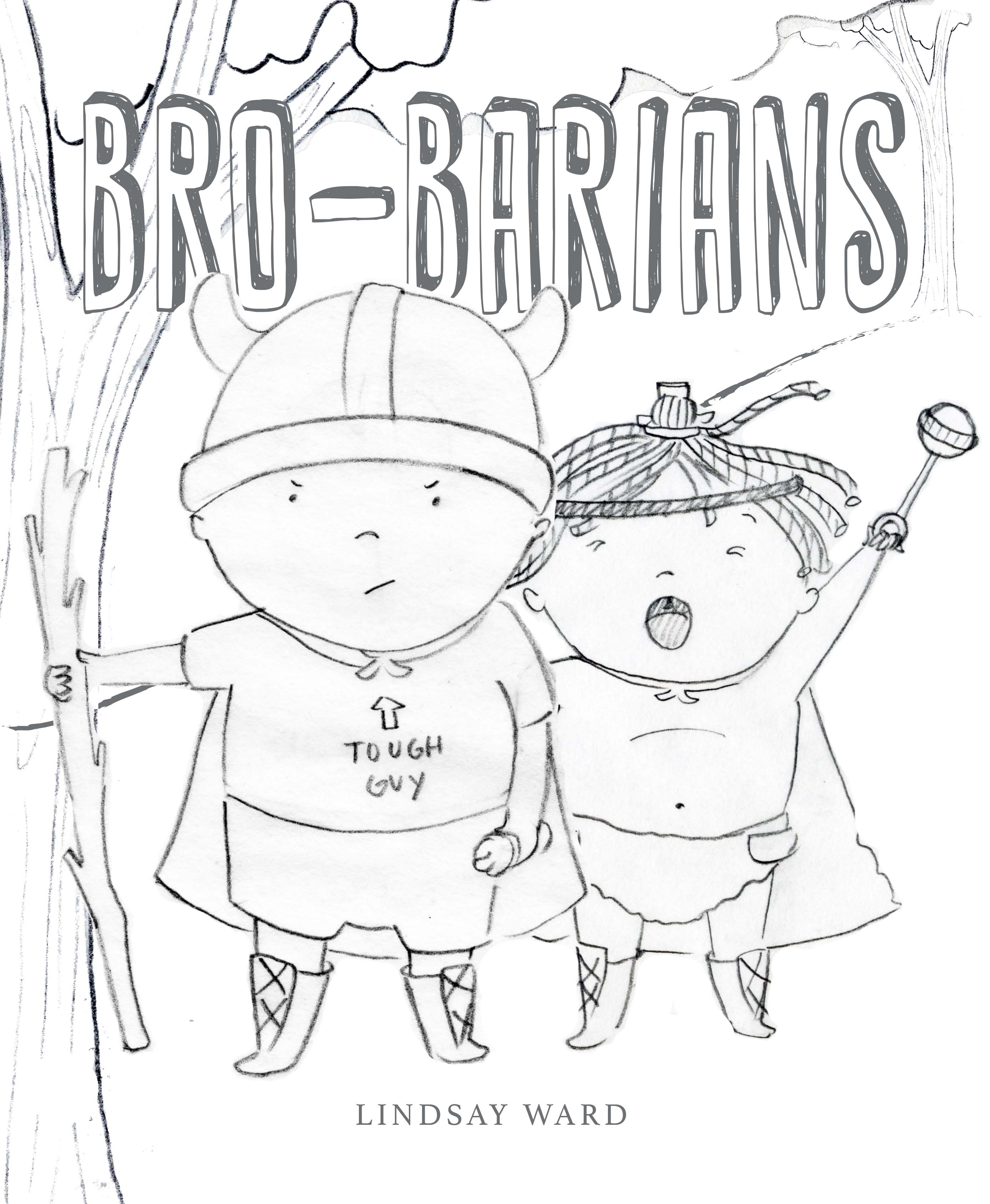 Now we were getting somewhere. We could see the brother’s environment, we had a head on perspective to connect with them. But, by closing Iggy’s eyes, the reader loses the connection with him. So this cover option didn’t make it either. 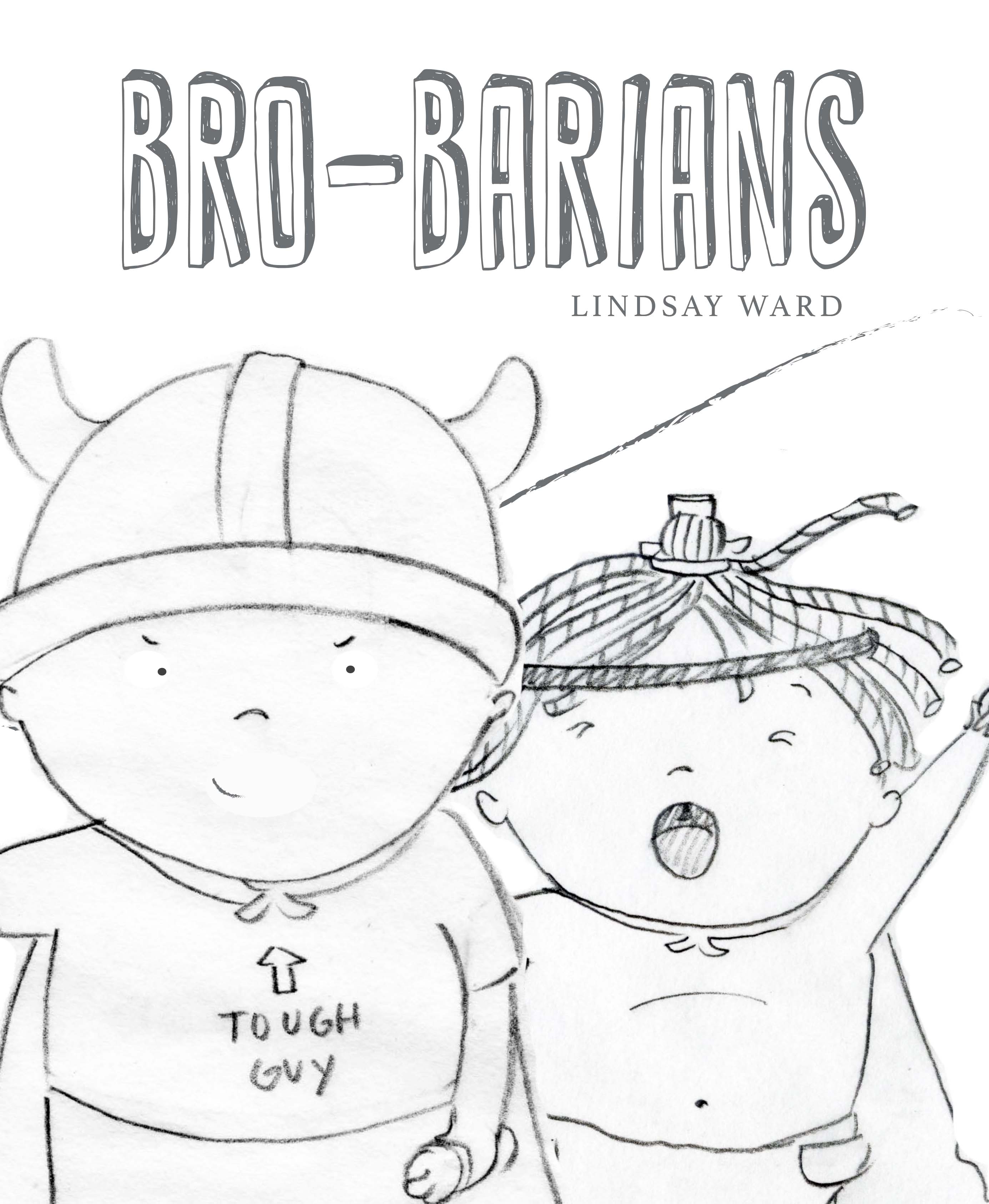 I tried a variation on Cover Sketch 3 by doing more of a close-up on the brothers. Obviously Iggy’s eyes closed was still an issue, but I wanted to see if a close-up would make a difference. Ultimately, we felt that we understood the context better if we could see more of the background and the objects they were holding on to. 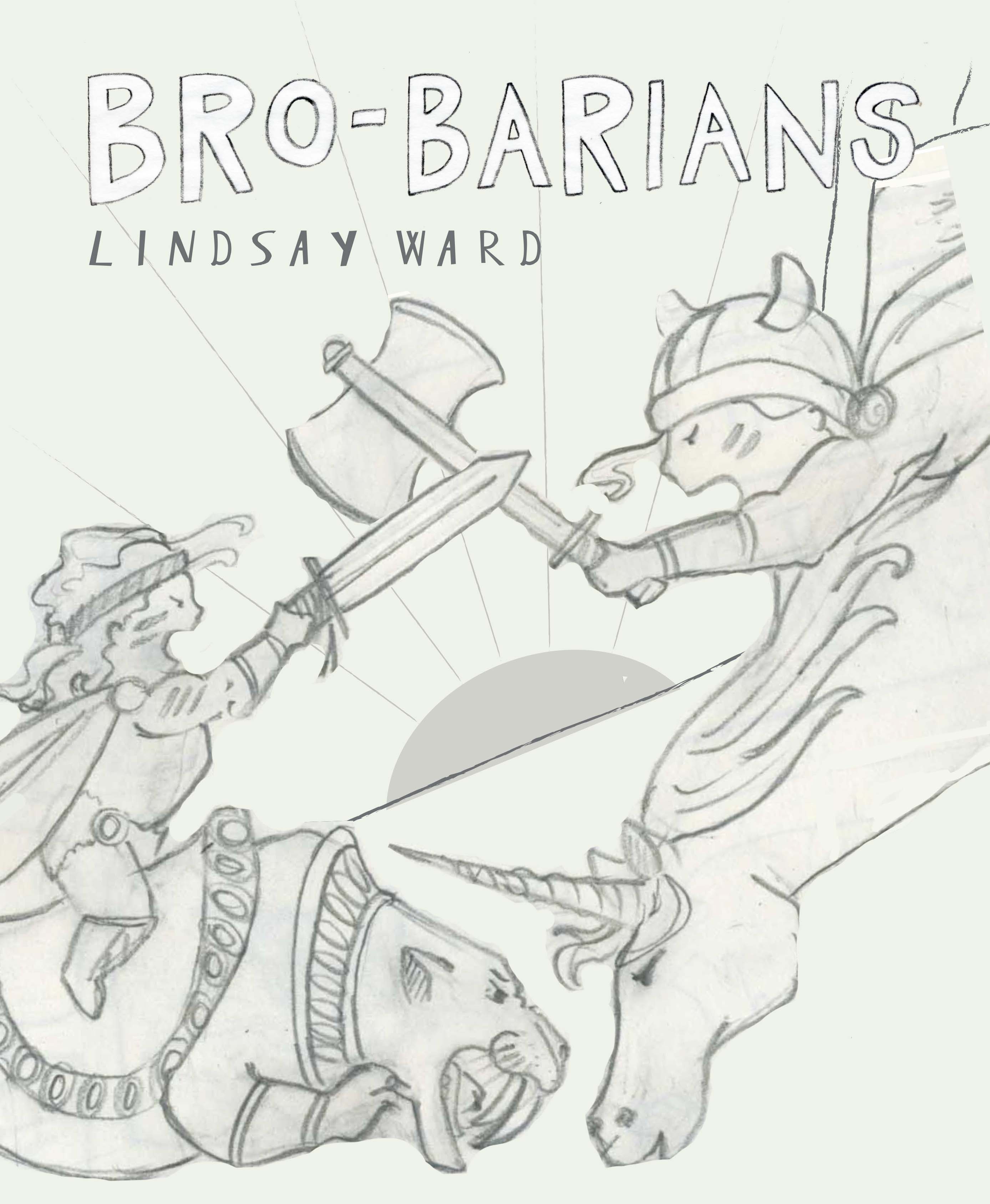 Again, super gung-ho. I loved the idea of this cover, but it would have given away too much. And this spread in the book is one of my favorites. Having gone this way for the cover would have taken away from the climax of their battle scene. 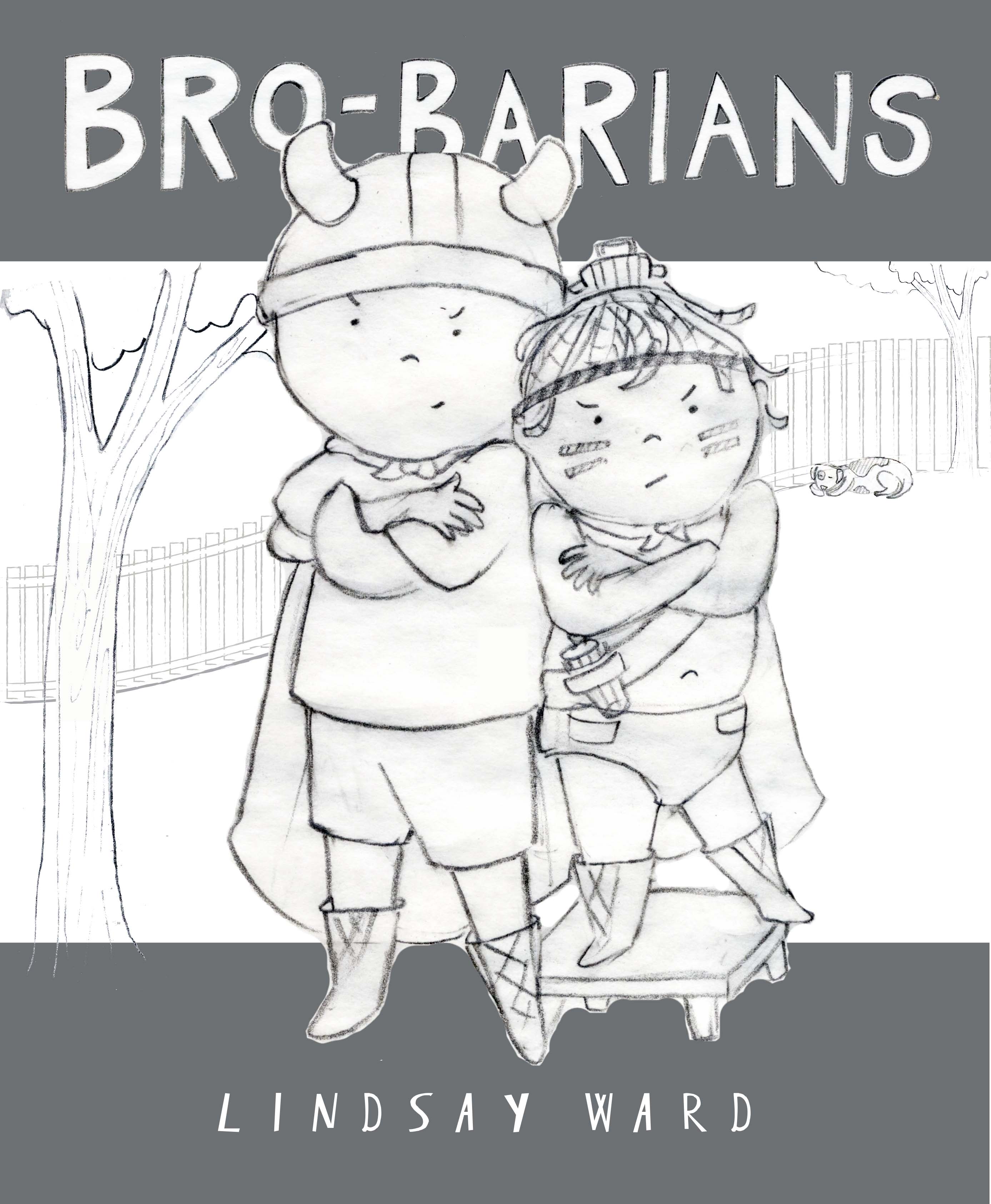 While I was sketching all of the cover options, this was one of my favorites. But after some back and forth over it with the team at Two Lions, we decided the attitude the boys had was a little too much and didn’t really reflect the feel of the book. 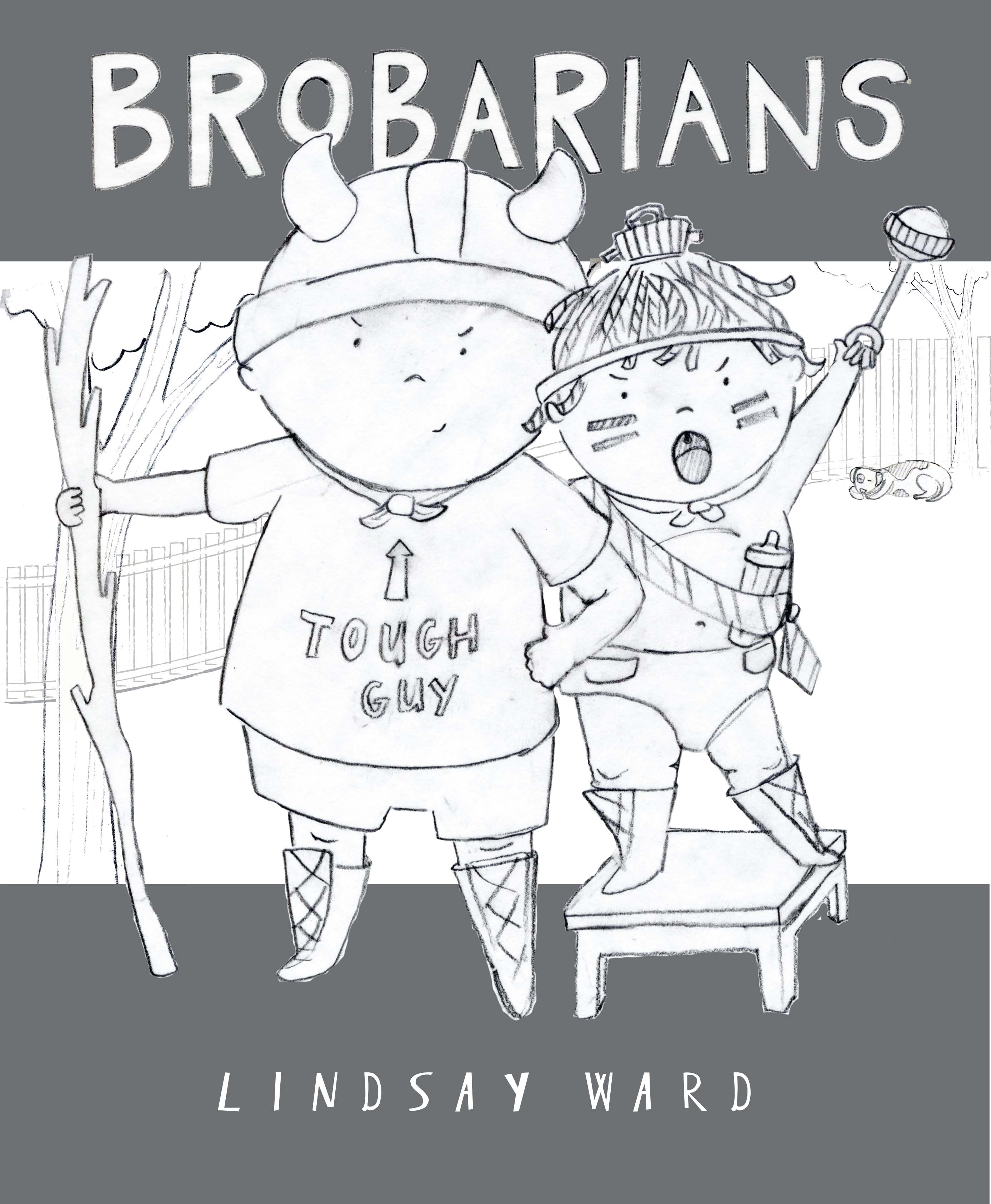 Finally, we had a winner! I say finally like seven sketches is a lot, it’s really not. But I was thrilled with this sketch and so happy that the team at Two Lions loved it too. It showed the environment, the brother’s personalities, and the feeling of the book. It was the whole package! You’ll also notice we dropped the hyphen in the title. We thought this would be much easier for readers when looking for the book in a search engine. Next, we had to make the jacket… 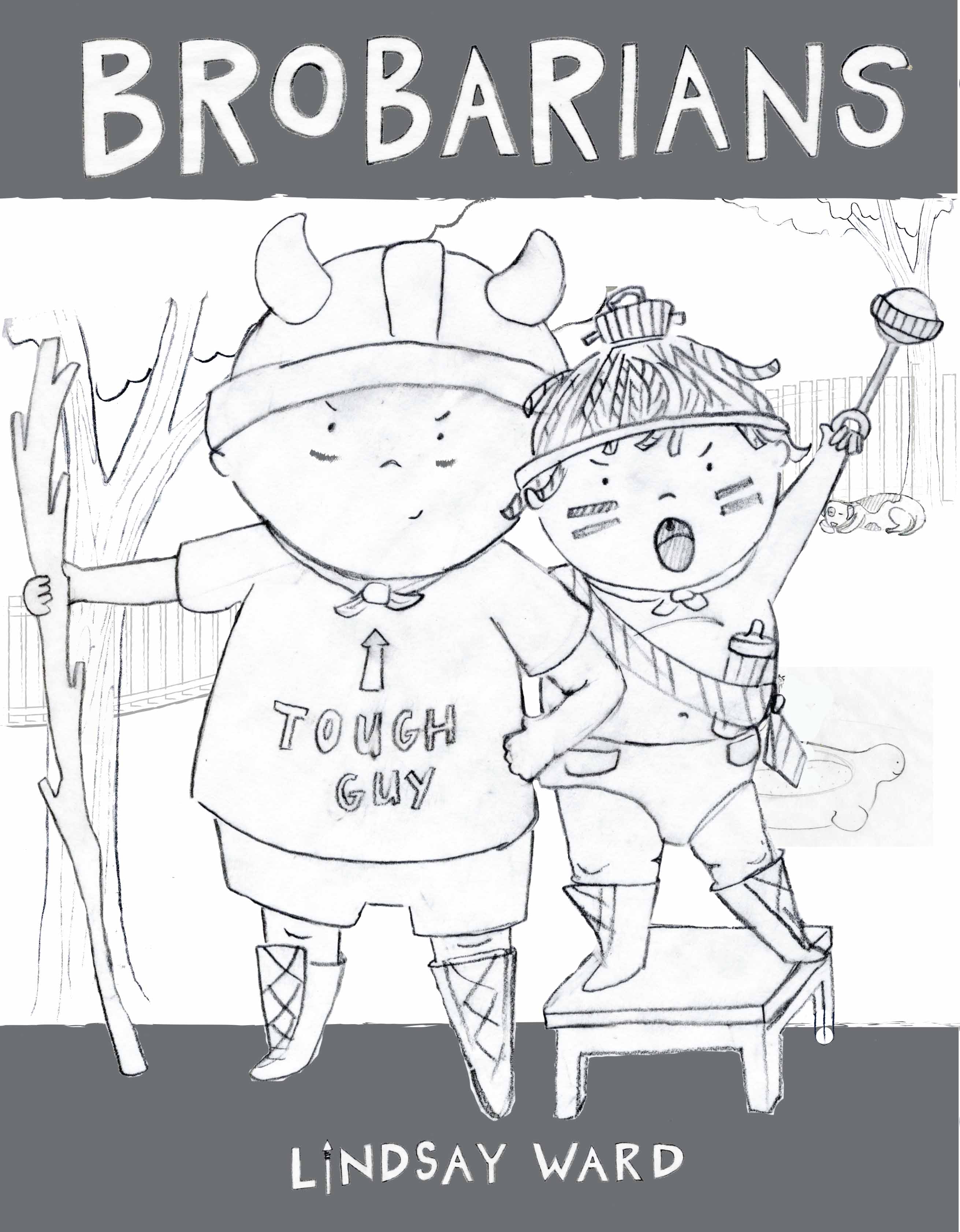 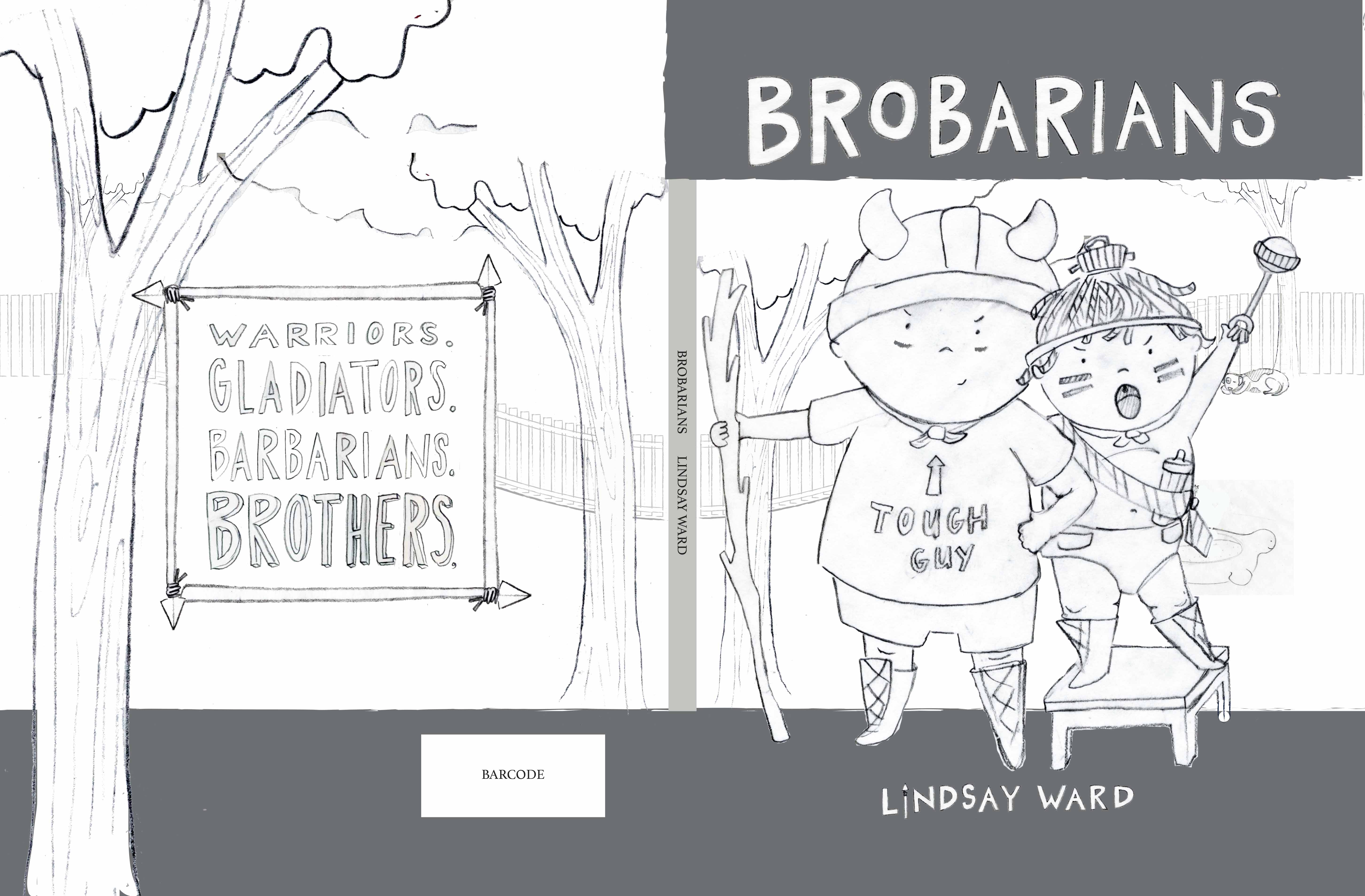 Then I created the rest of the art for the jacket. Now I needed to add color… 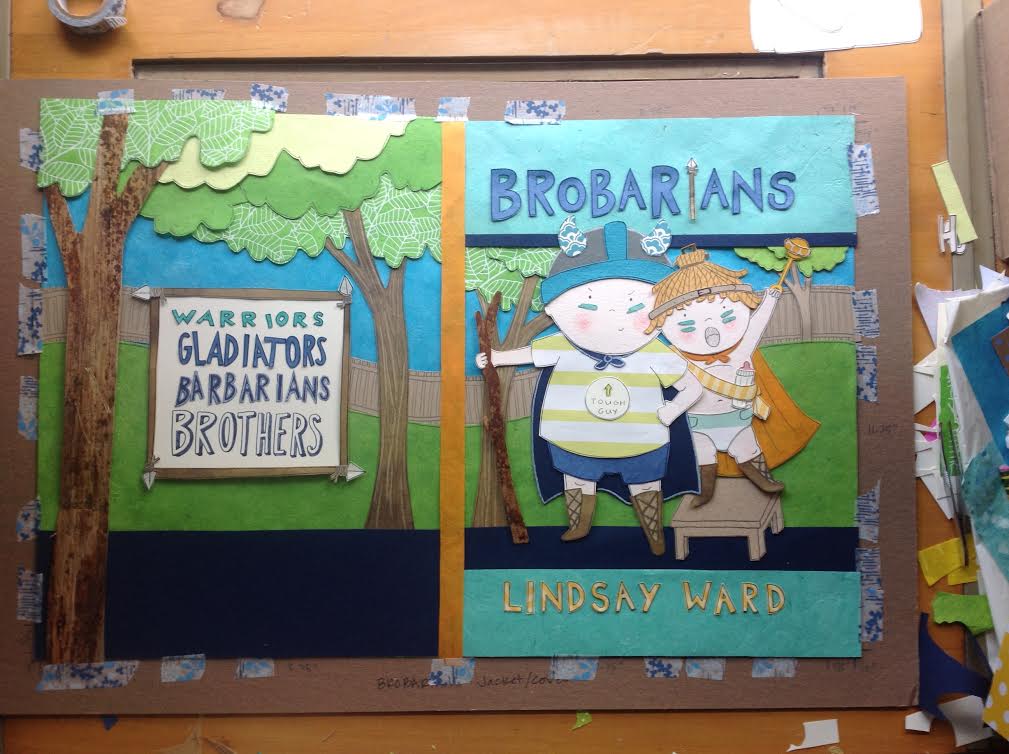 This is how the art looks when I send it to my editor and art director for approval. Everything is taped down so that I can still make changes. I had run out of drafting tape at this point and all I had left was floral wasabi tape, thus the patterned tape everywhere. I don’t glue anything down until the very end.

Then the book designer goes in and lays out all the copy on the flaps and spine of the book. We went through a few changes with this until we settled on the perfect one. I’m thrilled with how it all came together. I worked with an amazing team of people at Two Lions.

Ta-da! Here’s the final cover! I’d come along way since the cover I submitted with my book dummy during the submission process: 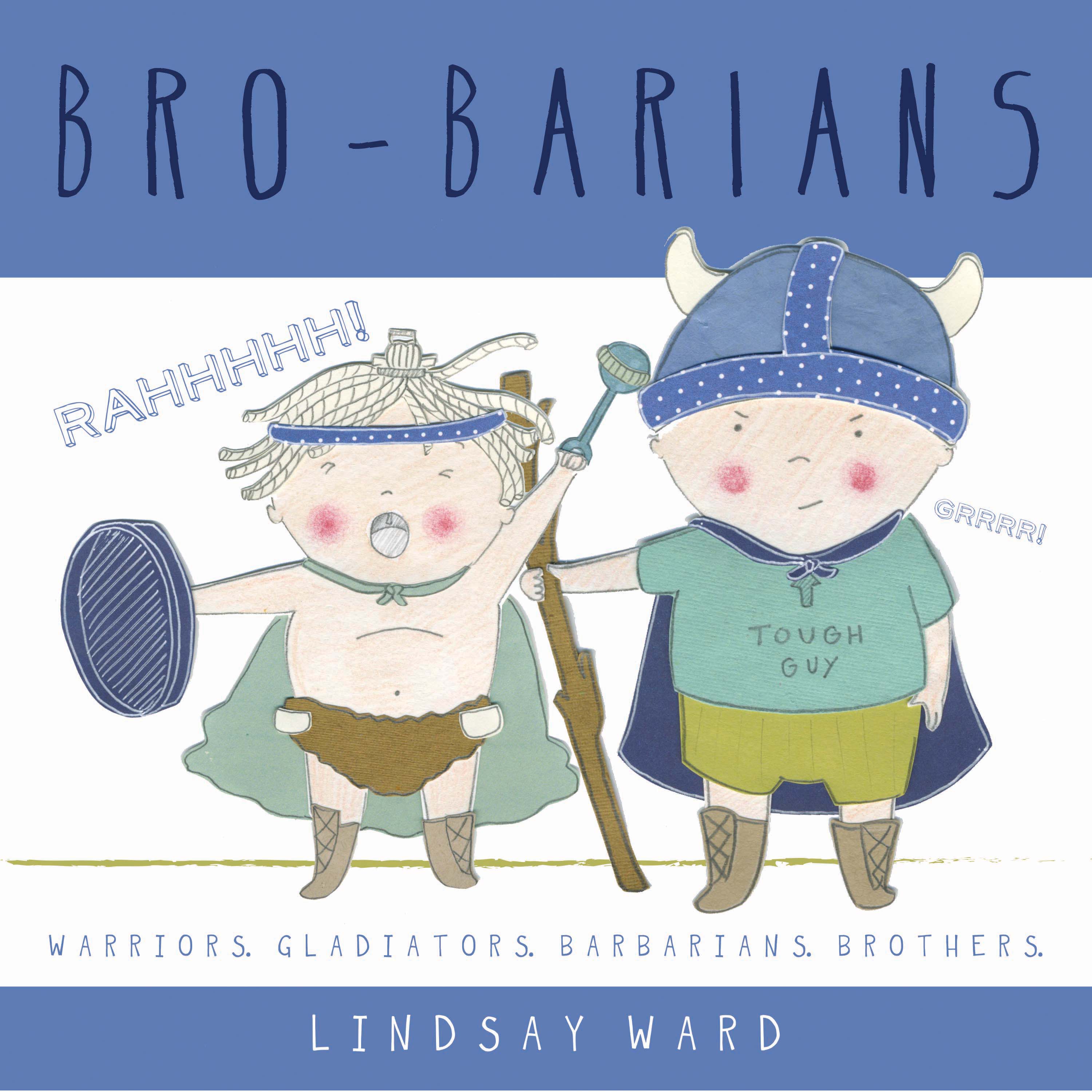 So all that for one cover – no big deal right? I hope you enjoy Brobarians as much as I do. For more information about the book or to pre-order Brobarians, click here.

Until next time, Happy Reading! 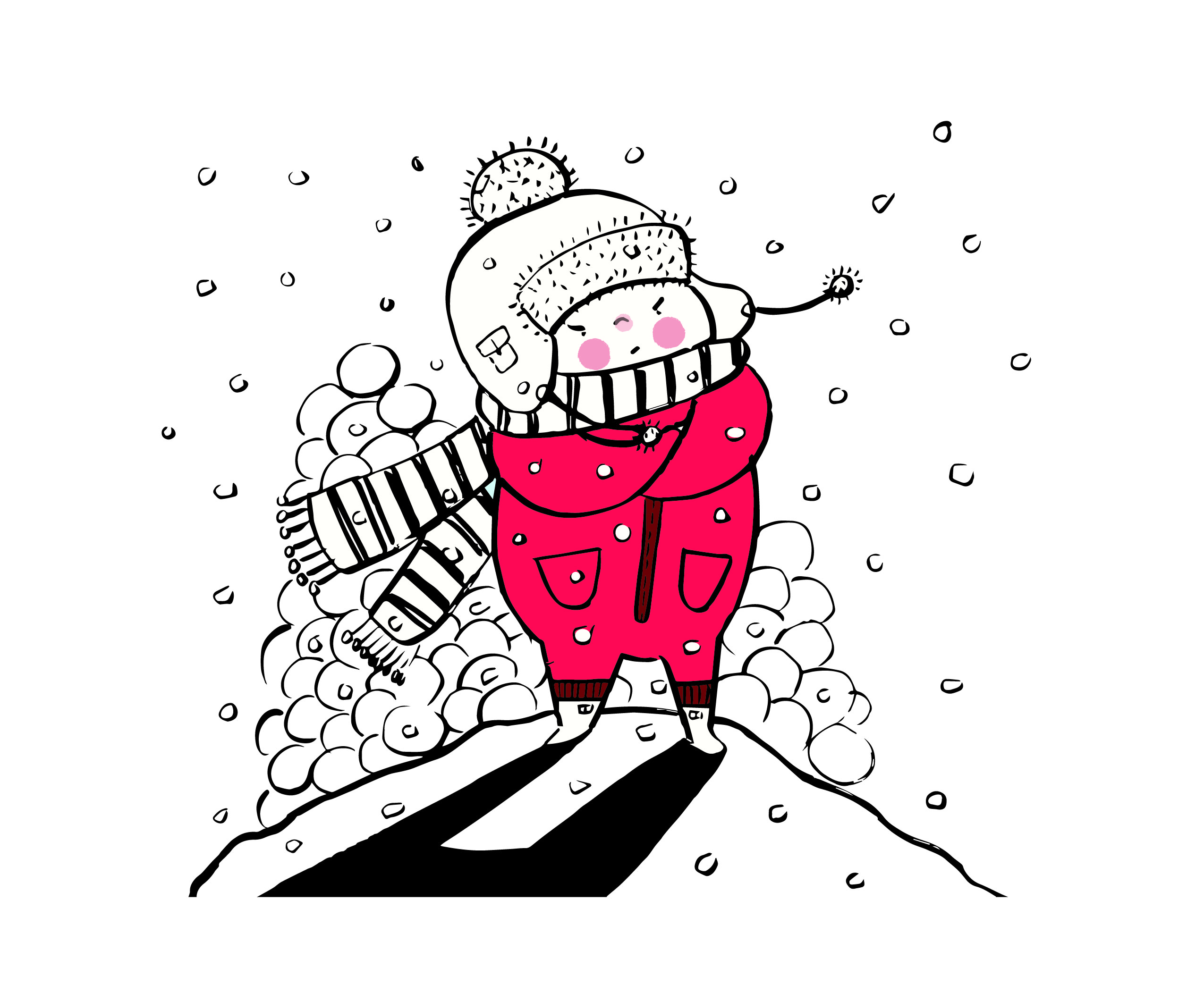