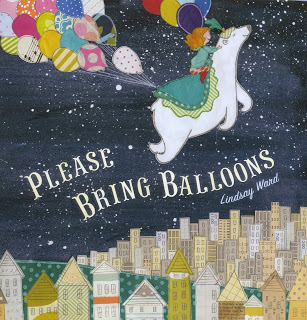 I’m so excited that today is the book birthday of my newest picture book, PLEASE BRING BALLOONS!  Since I finished the artwork for this book I have completed another book, which will come out next fall, and started working on a new story.  It seems so long ago!  I’m thrilled it will finally be released into the wild today!

In honor of my book release I thought I would share some behind the scenes photos from the making of Please Bring Balloons.

Originally titled The Balloon Thieves, the first few manuscript drafts were very different from the book as it is today.  The irony of it all is that I followed up When Blue Met Egg with a story about a carousel.  I absolutely hated working on the carousel spread revision I did for Blue (I don’t like to draw horses), so needless to say my editor was surprised to find my new manuscript focused on one (read more about the making of When Blue Met Egg here).  But this carousel featured wild animals…totally not the same as drawing horses!

In the first draft the polar bear was a real polar bear (not a carousel polar bear) who ends up lost, wandering the boardwalk owned by Emma’s family.  Emma decides she has to help the polar bear get back home to the North Pole… 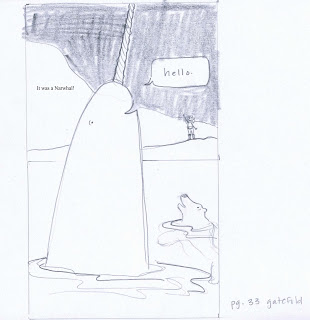 Once they get there, they meet a narwhal and a walrus.  Sadly both characters never made it into the final book because I took the story in another direction.  I am particularly fond of the narwhal, maybe he will have his own story one day…
Color studies sent in with the original dummy: 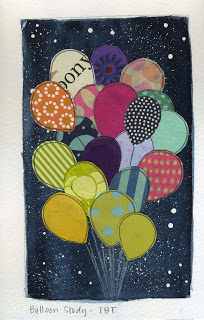 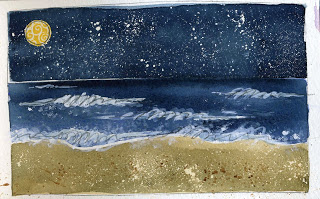 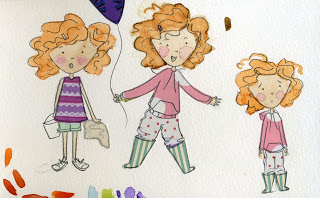 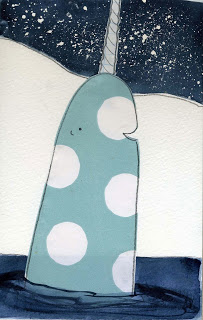 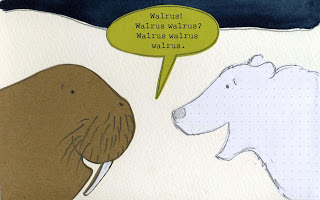 My editor loved the idea but wanted to see revisions to the storyline. After quite a few more drafts, the manuscript eventually developed into its current version, however it was now titled The Great Polar Escape.  My editor and I realized this title was much too close to Chris Van Allsburg’s famous picture book The Polar Express.  We left the title for the time being, knowing we would be addressing the issue down the line.  It wasn’t until I began working on the finished artwork for the cover that we decided on “Please Bring Balloons.”  I love that the title is an invitation.
Once the manuscript was finished I began working on the storyboard and final sketches: 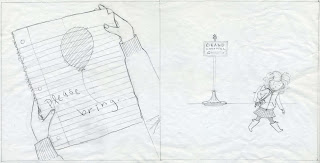 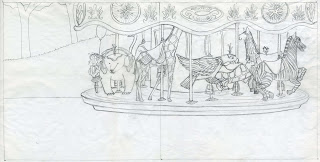 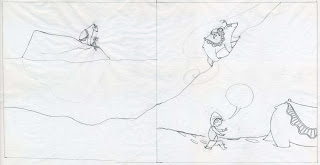 Once the sketches were approved, I started developing ideas about how I was going to execute the finished artwork.  When I worked on When Blue Met Egg, I exclusively used cut paper, acrylic paint, and pencil.  I felt like Please Bring Balloons needed a lighter touch.  I knew I was going to use cut paper again, but I wanted the sky to feel like an expansive space, engulfing Emma and the polar bear in the possibilities of adventure.  Watercolor allows for that kind of depth, whereas cut paper  tends to create a flat space depending on the textures of the paper being used.  I experimented with different shades of blue to get the sky just right: 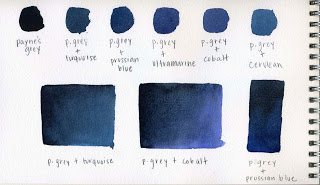 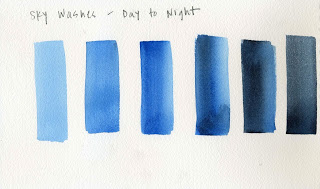 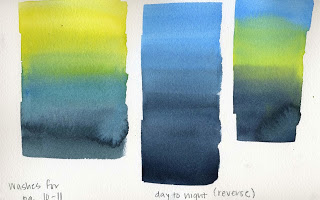 Then I began to develop my color palette.  I wanted this book to be very vibrant, from Emma’s red hair to all the patterned saddles on each carousel polar bear.  This was the color swatch guide I created for the book before I began the finishes: 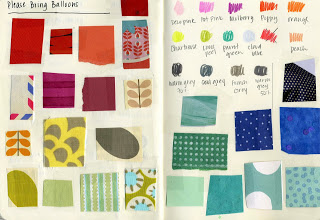 Typically I always use paper that relates to the book in some way or another.  For Please Bring Balloons I collected vintage maps of the North Pole, sheet music, calendars, board game score cards, binder paper, airmail envelopes, various polka dot patterned paper, old letters, and graph paper.
Here are a few of the finishes as they were being glued together: 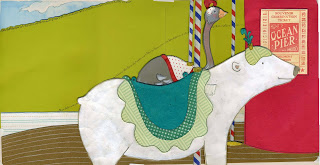 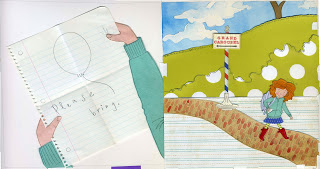 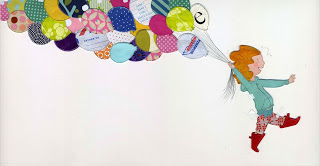 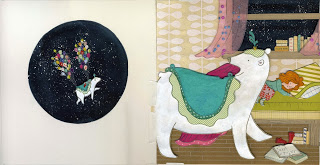 Many of the backgrounds were added in during the revision process: 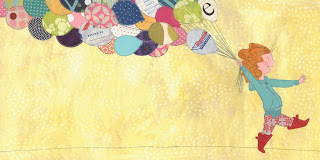 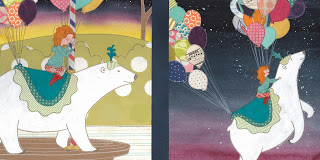 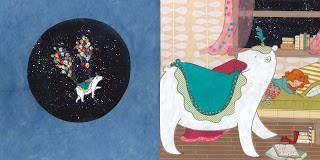 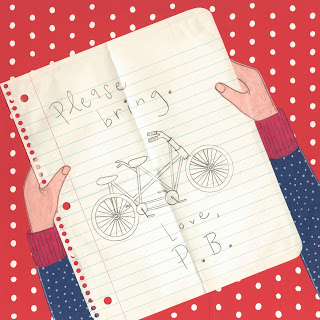 Once the finished artwork was completed we began working on the cover sketches, end papers, and book jacket.  Unlike When Blue Met Egg, which I created 40 cover sketches for (read more about this here), I knew exactly what I wanted the cover to look like for Please Bring Balloons.  I wanted the reader to feel like they were leaping into and adventure with Emma and the polar bear from the first moment they encountered the book.  Here are the original cover sketches: 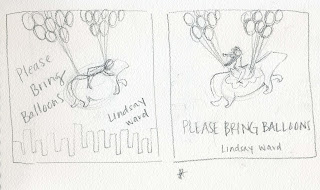 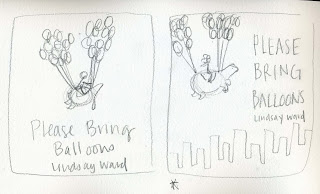 Which resulted in the finished product…

I have to say how much I love the book designer I work with, Mina Chung, she is amazing.  It is part of her job to create the overall design of the dust jacket.  Not only did she include lots of polka dots (which I love) and Emma’s adorable spot illustration, but there are dancing polar bears holding up the bar code! It doesn’t get cuter than that!!
I’m so proud of this book and I hope you all love it as much as I do.
Happy Reading!