I have been meaning to do this post for a while now. There is so much that goes into making a picture book that readers never actually see. Sometimes illustrations are swapped out, text is edited, layouts are redesigned, and so forth. Picture books go through many different hands, rounds of edits, and revisions before they are the nicely packaged book you hold in your hands at the bookstore. Recently I was at a dinner where someone said to me how easy it must be to write and illustrate picture books. I mean they are for kids, how hard can it be? This is my response to that idiot:

IDEA. That’s where it all starts, right? We as writers and illustrators are observers of the world around us, using experiences from life as our inspiration. I have never written a picture book that didn’t directly relate to me in some way or another. Recently I responded to questionaire that my editor asked me to fill out about working on When Blue Met Egg for the Penguin website. The first question was about my inspiration for Blue:

“Between my junior and senior year of college I moved to New York City for the summer working as an intern at an art gallery. Although I grew up in the Bay Area, I had never been to a city that felt as big as New York. I was so small compared to all the skyscrapers that surrounded me. I lived on the Upper Westside so I spent a lot of time near Central Park. I think the combination of the setting and the way I felt that summer led me to write When Blue Met Egg. I loved the idea of a small character navigating a large city confidently. By the time I left New York I was so proud of the fact that I knew my way around and wasn’t afraid to explore new places. That is how I wanted Blue to be – brave, confident, and always willing to make new friends.” 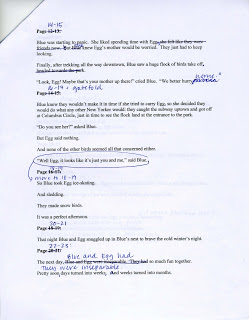 MANUSCRIPT. It took me about four years to write the final draft of Blue. The first versions were awful. I mean scary bad. Those will go with me to the grave. When my agent, Mary Kole, took me on as a client I told her about this story I was working on about a bird in Central Park. She loved the idea of it, but I knew it was no where near being ready to show her. I mean I wanted her to keep me as a client not go running for the hills! So we sold Pelly and Mr. Harrison Visit the Moon, and Blue stayed buried deep in the files of my computer. After Pelly came out Mary started nudging me again. “What about that Central Park story?”

So I took another crack at it, and finally after a few more drafts we were ready to go out on submission with it. Enter fabulous editor, Nancy Conescu from Dial Books for Young Readers. Nancy believed in Blue just as much as Mary and I did. I actually didn’t really have much of a dummy when Nancy saw the manuscript, but she had seen my illustration work and was willing to make an offer after only seeing the story and a couple drawings. Needless to say I was ecstatic! I don’t think there are words for the way you feel when you sell your first book to one of the big six publishing houses. The whole experience was amazing. 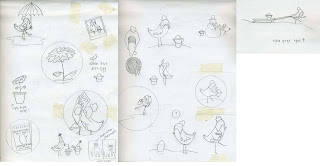 CHARACTER STUDY. Usually I work on character sketches and send them out along with the dummy on submission. However, as I mentioned above Blue received interest before I had finished a lot of preliminary drawings. Character studies are essential. My best work comes when I know my characters inside and out. If I have taken the time to draw them in various situations, with different facial expressions, then I will be able to draw them effortlessly when I sit down to do the sketches and finishes. Pencil line tells you everything about the artist’s familiarity with their character. If you see hesitation in the line, then usually it’s because they rushed the work. Lines should be fluid and natural in a well drawn character. A great example of this is Suzy Lee’s work. Look at a copy of Wave and you will see exactly what I am talking about. 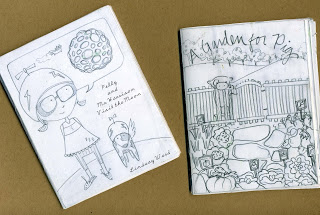 These are the dummies I created for Pelly and Mr. Harrison Visit the Moon and A Garden For Pig.

DUMMY. Can I just say that I love how much this term makes children giggle when I mention it during school visits, especially among second graders. Hilarious. A “Dummy” is a sketched version of the book with the text laid out on each page that an author/illustrator sends to the publisher to give them a sense of what they want the book to look like. Of course the dummy will more than likely change quite a bit before going to print, but it’s the starting point for any picture book.

Dummies are like guidebooks for illustrators. For me the initial dummy is actually the hardest part of the entire process. Anytime I start with a blank page, it’s always intimidating. There are so many things involved with getting the dummy right that it can be overwhelming. I’m constantly worrying about pacing, page turn, layout, book design, and so on and so on. The list seems endless. A dummy represents all the possibilities of what the book can be. I try to take it one spread a time, however the book must work together as whole, obviously. So there is a lot of drawing and then taking a step back to make sure it fits with the rest of the drawings. I physically build my book dummies, usually scaled at half the trim size of the book, so that I can flip through them, read them aloud, and fix any pacing issues.

EDITORIAL LETTER. Editorial letters are generally not fun to go through. Most writers I know, especially novelists, fear them. They are letters you get from your editor/art director/book designer/copy editor that point out all the flaws in the drawings and/or text. Usually they are extremely detailed and specific. That being said, just because they aren’t fun to read or have to make changes because of, they are usually in the best interest of the book. Every editorial letter I have ever received made the book a million times better. My personal favorite is the copy editor’s comments. Here are a few favorites I received with regards to Blue:

“Due to inflation, the view finder would cost .50 rather than .25.” I mean who notices that!

“The torch is in the wrong hand on the Statue of Liberty.”

“The harbor would have more boats in it during this time of year.”

I think of a copy editor’s job as a real-life Where’s Waldo?. It amazes me what they find.

REVISIONS. I can’t say this word enough. Revisions are the bulk of creating a picture book. The initial revisions in a picture book are after receiving the editorial letter. Because I am an author/illustrator mine always include both text and art notes. 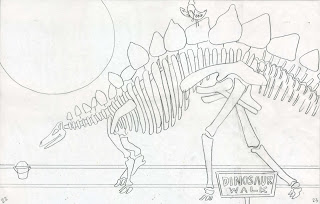 During sketch revisions, my editor suggested using a location in Central Park (specifically the carousel) instead of the Natural History Museum (shown above) for pacing reasons. Now let me preface this by saying that every artist has their thing that is just impossible to draw so they avoid it at all costs. Mine was horses. So you can imagine my reaction when my editor asked me to draw a whole carousel full of them. Here is the original carousel sketch that I did:

Remember what I said about revisions? 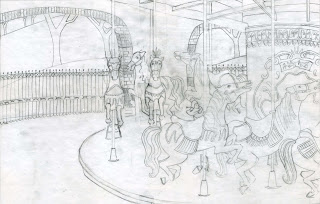 After lots of sketching, I realized she was right and it made the book better. I couldn’t be happier with the way that spread turned out. Also, after drawing horses repeatedly for this spread, I’m proud to say I’m no longer intimidated by drawing the anatomy of a horse. 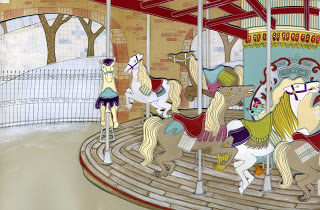 COLOR STUDIES. Because I work in mixed media and cut paper I spend a lot of time collecting vintage, found, and antique paper. For Blue, I used old school test sheets from the 1950s, crossword puzzles, maps of New York from the 1930s, and vintage graph paper. I have quite a bit of it exploding from bins in my studio. After I find all the paper I want to use in a book I create a color swatch: 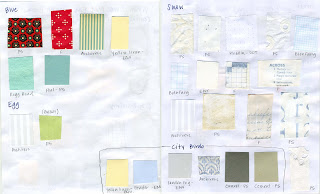 This is essentially a guide book for me so that I can keep track of all the types of paper I have used for each part of the book.  Here is a bit of the evolution of Blue: 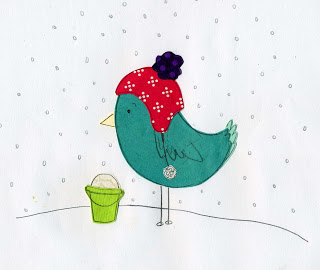 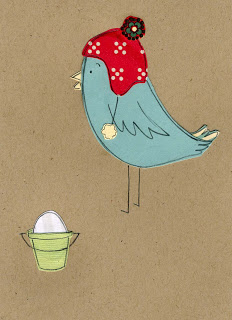 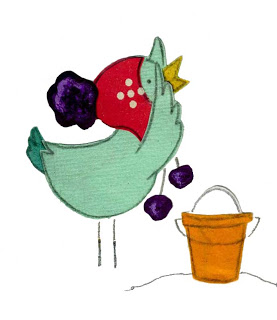 There is a lot of layering in cut paper so it can be hard to know what I used for a particular object if I don’t have a record of it. I have learned this the hard way. Let me tell you, ripping up spreads is NOT fun. Okay, maybe a bit therapeutic depending on how I feel about the way the spread is looking, but frustrating nonetheless. So instead of gluing all the paper down before approval by the art director and/or editor, I tape it all down, scan it, and wait for the verdict. It looks a bit like this during this stage (notice the white tape everywhere): 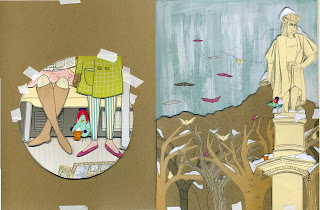 FINISHES. Yay! We made it! Going to finishes is a funny thing, because at first it feels like crossing a finish line after all the sketching and color studies, but really it’s just the beginning of a lot of work. I turn into this totally neurotic person and obsess over each spread, wanting everything to be perfect. Needless to say I’m a bit stressed when I’m working on the finishes. Here is the gatefold spread of the Brooklyn Bridge before and after adding the snow:

In case you were wondering, no, I did not cut all those tiny white dots out of paper. Toothbrushes can be used for other than brushing your teeth. This is by far the hardest spread I did for the book. But it is also my favorite. The bridge itself is one single piece of paper that I cut using an e-xacto knife. Let’s just say I had quite a few cuts on my fingers afterwards.

TEXT LAYOUT. This is one of my favorite parts, which is funny because I don’t even do it. I LOVE typography. So the font is very important to me. Luckily, I have an amazing book designer, Mina Chung, who I work with at Dial. She is responsible for the fabulous text layout and font choice in Blue. Here’s a before and after:

Once all the finishes have been approved. The artwork is mailed to the publisher. It is rather scary entrusting USPS, Fed-Ex, or UPS with this. I’m sure these people are very good at their job, but sending original artwork always makes me really nervous. I’ve heard horror stories. I’m usually antsy until I know the artwork has arrived. 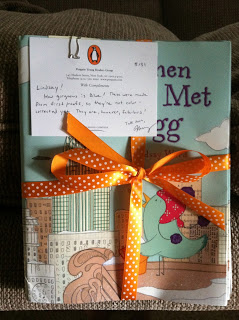 F&G. Which stands for “folded and gathered.” This is what the book looks like before it is bound. It is pretty spectacular when the F&G finally arrives. At this point any color corrections needed have been made to the color proofs.

And then all the hard work turns into a picture book. It is truly amazing to open a box of author copies. Not to mention walking into a bookstore and seeing it on a shelf for the first time which is completely magical. Seriously. I can’t even properly describe it.

So, now that I have written probably the longest blog post ever, still think it’s easy?

Wondering about the cover for Blue?  Check back next week for a post on making the cover from start to finish.