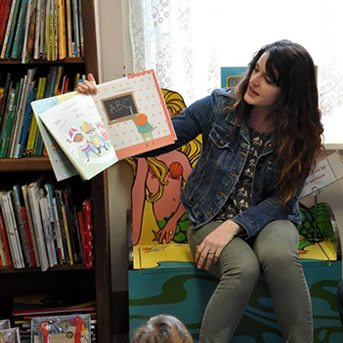 Born and raised in sunny California, Lindsay decided to try snow and moved to upstate New York where she received her BFA in Illustration from Syracuse University. After bouncing around a bit in New York and Boston, she landed in Ohio (for the love of her life of course!) She has written and illustrated over two dozen books for kids. Her most recent book is The Capitol: A Meet the Nation’s Capitol Book with HarperCollins.

Her work has been reviewed in The Horn Book, Kirkus Reviews, Publisher’s Weekly, and The New York Times.

In 2017, Lindsay founded Critter Lit, a free online picture book manuscript and illustration critique service for up-and-coming authors and illustrators, which she co-runs with her husband, author Frank Tupta.

Lindsay lives in Peninsula, Ohio, surrounded by the Cuyahoga Valley National Park, with Frank, their three boys, and Sally, a rambunctious pit-bull\lab mix who keeps things interesting, and a flock of ducks. Most days you can find her sketching and writing in her studio or editing manuscripts for Critter Lit.